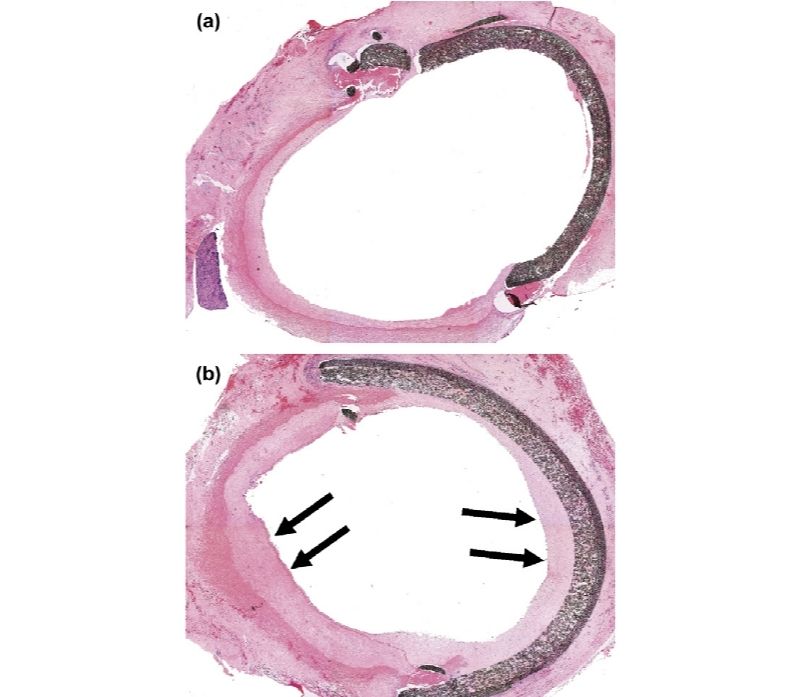 Arterialized vein grafts often fail due to intimal hyperplasia. Arterial bypass surgery with autologous vein grafts is a common operation for treatment of occluded coronary arteries or occluded arteries in the extremities and for the creation of arteriovenous fistulas for blood access in patients who require haemodialysis. Although bypass surgery with venous conduits is an effective treatment and gives satisfactory early results, the frequency of graft failure is unexpectedly high. Intimal hyperplasia (IH), characterized by the accumulation of smooth muscle cells (SMCs) and extracellular matrix (ECM) in the intima of the vein graft, is the most common cause of limited patency. IH occurs in ∼50% of vein grafts and is a major cause of recurrent ischaemia.

IH is a universal response of vein grafts to altered haemodynamic forces and hypoxia-reoxygenation injury. Direct or indirect graft tissue injury, due to free radical species generated during the vein grafting process, leads to the release of cytokines and chemokines, and is one of the critical events in the pathophysiology of IH in vein grafts. After engraftment, the vein graft is subject to suddenly increased mechanical stretch due to exposure to arterial blood pressure. This stretch induces rapid cell death with a reduction in cell density by ∼60% within the first day after surgery and is followed by an increase in abnormal proliferation of the cells. Vein grafts are exposed to an environment with approximately three-fold higher oxygen concentration than the venous circulation, and this environment promotes oxidative injury within 2 weeks. In addition, macrophages infiltrate the graft after implantation, followed by activation and production of reactive oxygen species (ROS). Excessive ROS production overwhelms the endogenous antioxidant defence mechanisms and leads to the oxidation of macromolecules, such as DNA, proteins, and lipids.

Hydrogen functions as an important physiologic regulatory factor with antioxidant, anti-inflammatory, and antiapoptotic protective effects on cells and organs, and the ability to mitigate a variety of diseases. Although the safety of inhaled hydrogen gas in humans is demonstrated by its application in Hydreliox, an exotic breathing gas mixture containing 49% hydrogen used during very deep technical diving, hydrogen inhalation therapy is still in the preclinical stages of investigation. Currently, administering hydrogen by inhalation is not practical or suitable for continuous consumption for preventative uses. On the other hand, solubilized hydrogen is a portable, easily administered, and safe method of delivering hydrogen to humans.

Based on the potent antioxidant and anti-inflammatory properties of hydrogen, oral intake of hydrogen-rich water (HW) could act as a novel and effective therapy for intimal hyperplasia and could easily be incorporated into daily life.