I. Causes of Ageing and Disease

Causes of Ageing and illness?

To review the recent research results, we can summarize the following 3 points.

* All diseases (90%) are affected by harmful oxygen free radicals. About 10% of them are caused by bacterial and viral diseases or infections.

What are harmful oxygen free radicals?

※ Breathe more than 20,000 times a day on average, more than 1 million liters of air is released through the respiration, and oxygen absorbed by double breathing is about 1500 liters, In other words, Our body produces oxygen free radical of 30 liters every day. (Gale Encyclopedia of Medicine, 2008) –

1. The basic cause of Aging and illness is due to cell damage.

2. The cause of cell damage is harmful oxygen free radicals.

3. 90 % of all diseases are caused by harmful oxygen free radicals as a major cause of Cell Damage.

4. The hydroxyl radical is the most active one causing cell damages of those oxygen free radicals.

→ At present, Human life expectancy is about 80 years old due to Harmful oxygen free

※ SOD is the highest in the 20s, and gradually decreases after that, 50% in the forties and less than 10% if it exceeds 60 years old.

Limitation: SOD shows the highest value in the 20s, and does not produce after 40s.

Limitation: There is a disadvantage in that it can not completely remove Harmful oxygen free radical due to limitations of molecular size, water solubility, and lipoid solubility.

1. The most powerful antioxidative activity

Hydrogen is the smallest material in the universe and can reach mitochondria in the cell. 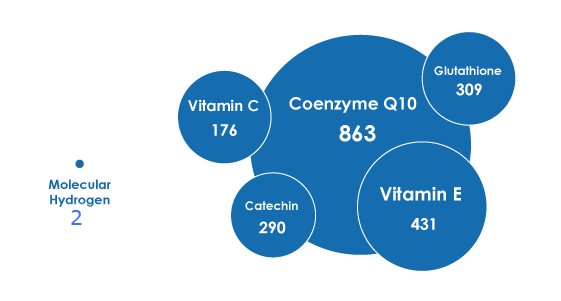 ※ Vitamin C acts only in the blood, Vitamin E acts only on the cell membrane.

→ It is the only substance that can remove harmful oxygen free radicals by effectively passing through both water and oil thereby penetrating water channels and cell membranes!

3. Harmless to the human body

In the case of hydrogen, it reacts only with oxygen radical.

It is naturally excreted through breathing and excretion due to its high diffusivity. In case of the absence of Oxygen free radicals to react, it gets excreted without any negative effects on the body.

– About 90% of diseases are related to oxygen free radical.

– As mentioned earlier, it reacts only with oxygen free radical as the most deadly component without reacting with active oxygen as the beneficial component.

5. No accumulation in the body after taking too much

– Hydrogen does not accumulate in the body. It is naturally excreted through breathing and excretion due to its high diffusivity in case of the absence of Oxygen free radicals to react.

→ Considering all the advantages of hydrogen as above, Hydrogen (H2, H+) is the most ideal antioxidant and new material of everyone’s dream in the 21st century.