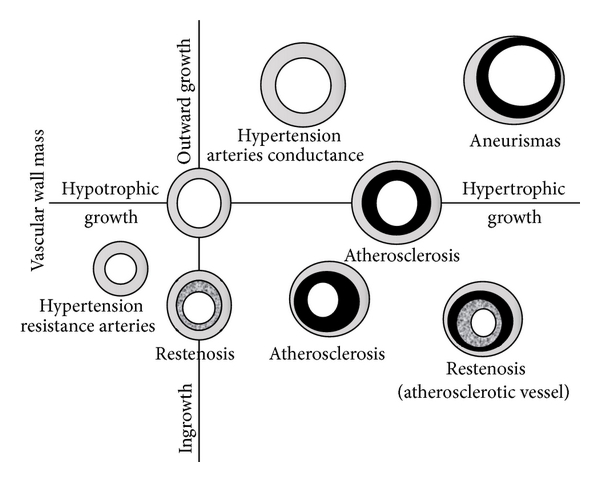 The vascular wall is formed by endothelium cells, smooth muscle cells, and fibroblasts interacting to form an autocrine-paracrine complex. During

vascularization, the vascular wall detects changes in the environment, integrates these intercellular communication signals, and, through the local production of mediators, influences vascular structure and function. Vascular remodeling is an active process of structural change that involves changes in at least four cellular processes: cell growth, cell death, cell migration, and the synthesis or degradation of extracellular matrix. Vascular remodeling is dependent on dynamic interactions between local growth factors, vasoactive substances, and hemodynamic stimuli and is an active process that occurs in response to long-standing changes in hemodynamic conditions; however, it may subsequently contribute to the pathophysiology of vascular diseases and circulatory disorders.

Cardiovascular disease (CVD), including ischemic heart disease, remains the leading cause of health loss and death worldwide. It has been suggested that lifestyle-related diseases such as hypertension, diabetes and obesity are involved in the onset of CVD, and disease progression is accompanied by vascular injury due to reactive oxygen species (ROS)-dependent chronic/persistent oxidative stress . Oxidative stress refers to elevated levels of intracellular ROS, which cause damage to lipids, proteins and DNA. Therefore, reduction of oxidative stress by down-regulating ROS could be an approach for prevention of the onset of CVD. Indeed, it was reported that angiotensin II receptor blockers attenuate atherosclerosis as a result of down-regulating ROS by inhibition of nicotinamide adenine dinucleotide phosphate (NADPH) oxidase activity.

In conclusion,  long-term hydrogen gas inhalation at a safe concentration has a beneficial effect on vascular remodeling, at least due to its inhibitory effects on ROS such as ⋅OH and ONOO-, DNA damage and cell proliferation. Recently, a hydrogen-producing machine has been used safely, and constitutive hydrogen inhalation has been suggested to provide benefit involuntarily in daily life. On the other hand, drinking hydrogen-rich water has a temporary effect and the patient needs to intend to drink hydrogen-rich water.

Sagar Gola
Previous post Can hydrogen boost your Mitochondria? Next post Hydrogen acts as a Cellular Anti-oxidant and Gene Regulator